You are invited to learn!

During the week you will get in total 10,5h of workshops plus taster classes!

The aim for this week is not only to take you on a Afro Swing journey from traditional African Roots to Swing but also to give you a taste of different styles of African dances, traditional as well as urban plus invite you to play and sing! Since the exchange is situated in Mozambique, traditional Mozambican dances will dominate the class schedule, but there will also be classes in dances from South Africa, Congo, Angola and Urban Mozambique plus a drumming and singing class! During any dance class you can choose to join the drummers and learn how to play instead of dancing. 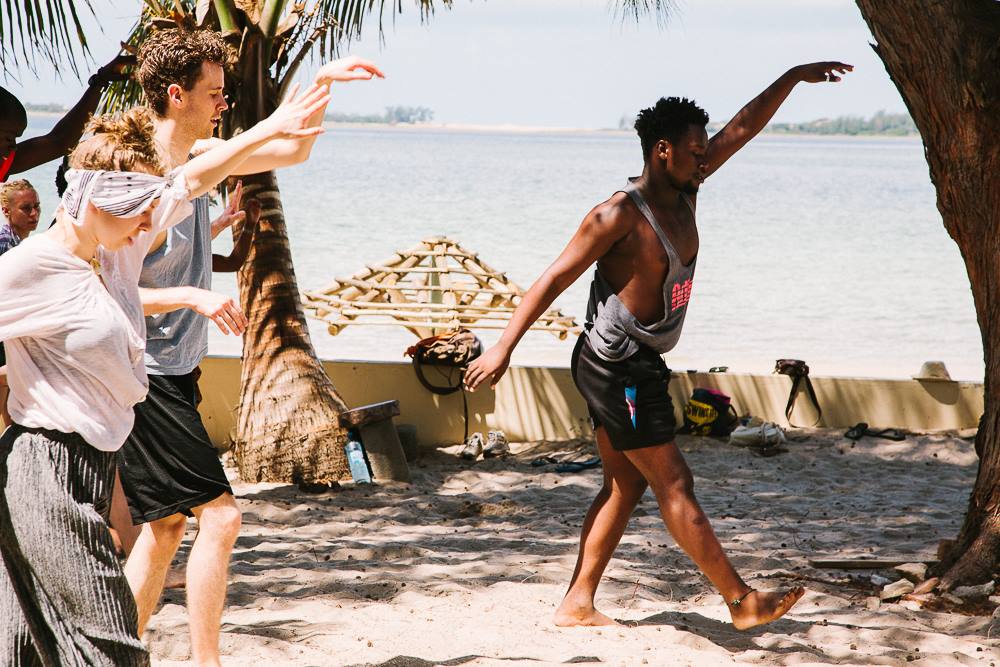 Introduction to African and Mozambican Rhythms and Movements (1h15min)

To warm up your body to these new rhythms this class will focus on connecting to the drums, ground yourself to the earth and shake lose all the tensions in your body to prepare yourself for a week full of dancing.

We will take you on a journey researching Afro Swing – the African roots of Authentic Jazz! With rhythm as our guide, we will better understand the African heritage of these “rhythm dances” we call within the swing genres and their shared traditions of expression. African American social dances have, first and foremost, been an expression of emotion or social allegory rather than something created for the stage. Using the feeling in our body from the previous class we will explore how we can not only see the visual African roots in Swing but also the rhythmical, emotional and spiritual traditions Swing has inherited from Africa.

Teachers | To be announced
Day | Wednesday

In this class we will be introduced to one of Mozambique’s many traditional dances. Count on being challenged physically and rhythmically while singing at the same time!

Teachers | To be announced
Day | Thursday

When a celebration or party is taking place, the most common way to dance in Mozambique is to start a circle dance that normally comes with specific rhythm and a set of steps or dance moves. Even though there are specific moves to each rhythm there is also space for individual expression and improvisation just like in Jazz dances from the Swing era. The dances can be danced in a circle on the square or around the fire at night. In this class we will learn the dances Ngalanga and Makwaya. Ngalanga is a celebration of life and love and invites us to shake until we get high. The story of Makwaya is that when dancing we are imitating very proud ducks that get into fights; indirectly ridiculing fighting men.

From African to Blues – Feeling the reality behind dances we love

Blues and swing as we know developed in the African American community in post slavery times with it’s roots in work songs, field hollers and spirituals which in turn have their roots in African folklore cultures.

We will take you on a journey from Africa through slavery and dances of that time, to spirituals and Blues.

This is opportunity to reflect, feel and respect the difficulties that people of African descendants have gone through and how all these emotions have been expressed through dance and music in the same way it still expressed today in Hip Hop, R&B and Urban African music.

Teachers | To be announced
Day | Thursday

There are numerous rhythms from across Mozambique and each rhythm is followed by a song and different movements. In traditions from across Africa, the rhythm trickles through everything: how people walk, sweep the house, work in the field or stir the pot. In this workshop the Manhiça twins will give you another piece in the rhythm jig saw puzzzle: they will teach you how to play different traditional instruments, explore poly rhythms and singing.

Teachers |To be announced
Day | Friday

Four 30 min dance workshops  with three different teachers! Get a taste of different African styles – traditional and urban for the Moonlight Dance Party.

Marrabenta – Marrabenta is Mozambique’s most popular dance developed in the 1950’s when conventional instruments came into the hands of Mozambican musicians and their traditional rhythms. It was the dance that brought the Mozambicans and the Português colonisers together in the dance parties just like Swing back in Harlem at Savoy Ballroom.

Soukouss/Kwassa Kwassa – Soukouss is a traditional rhythm from Kongo which brings out a lot joy and excitement, especially from the extreme hip movements!  In the 1980’s the traditional Soukouss music was popularised through more modern bands and the dance called Kwassa Kwassa spread over the country. Vitória will share her Soukouss/kwassa Kwassa moves with us in this class!

Pantsula – Pantsula is a highly energetic dance form that originated in the black townships of South Africa during the Apartheid era. It developed into a form of social commentary for black South Africans and has undergone several transformations with the country’s changing political tides. Pantsula dancers dance to express and represent the daily lives in the townships using the latest South African House Music. It is based on advanced fast footwork where similarities can be seen to both Tap Dance and the Charleston.

Afro House – African house music has exploded over the last couple of decades with South African House Dj:s become world known artists. Along with the development of the music, different urban dances has emerged expressing the contemporary urban life. Often every new song comes with a music video launching the new dance of the particular song or genre of house music. Just like The Twist, The Fish Tale or The Suzie Q were different dances in Harlem, in Southern Africa, Bondoro, Kwaito and Kuduro from Mozambique ,South Africa and Angola and which Vitória and Paulo will give us a taste of!

This video show you a Medley of some of the African Urban dances you will learn!

This is great! Who are my Teachers?
This fine crew