Hodi Maputo Afro Swing is since 2011 running a youth and kids program in Maputo called Hodi Afro Swing Kids. Kids from less privileged areas are learning how to dance and play traditional Mozambican music on a weekly basis for free. The kids are also learning African American Swing Dances like Lindy Hop and Charleston which has shown to increase their joy and connection to each other in the group. The activity create healthier children, it keeps them of the streets and is offering them a purpose in life as well as a community of friendship. Through the classes the children also learn about respect, gender equality, sexual health and how to avoid alcohol and drugs.

Every semester one important part of the project is for the students to perform Traditional dance and swing openly for the public and for family and friends. These performances are an important part of the children’s development since it increases their self esteem, they get to represent their historical roots and they gain respect from family and relatives giving the art form a higher value by seeing it performed. The children are also the future of Swing in Mozambique and are by their performances increasing the interest in the dances in the community and through television.

Hodi Swing Kids started in 2012 by Manuel Manhiça which he runs in collaboration with Nando Titos Sitoe and Vasco Magaia. Manuel, dancer and musician  saw the kids copying theire dance steps after having watched Hodi’s dance practice threw the window. Knowing how important dancing had been to him in his childhood he invited them to learn traditional dance and music. The same year the children also started learning swing such as Charleston and Lindy Hop with Lisa Josefsson, a dance form that has given the children lots of joy. The continuous Swing teaching has been led by Paulo Inácio. Manuel Manhiça says “When the children dance swing, it’s impossible not to be happy”. 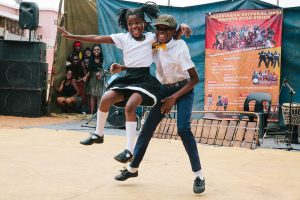